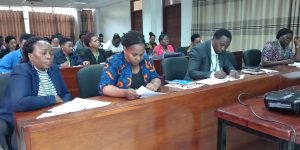 The University College of Education (DUCE) is a constituent College of the University of Dar es Salaam in Tanzania. The college has a mission to advance economic and social development through effective teaching, research, innovation and knowledge exchange. DUCE aspires to become a prominent hub for transformative education and training, research, innovation and public services. According to DUCE’s rolling Strategy Plan (DUCE, 2012), there are widespread gender related inequities and lack of gender mainstreaming in the social and economic activities in Tanzania. A key item on its strategic agenda is to achieve gender balance and mainstreaming and to contribute towards alleviating gender-based inequalities and inequities as well as promote greater awareness of gender aspects at the college, locally, nationally and internationally.

According to Dr Urio, a lecturer at DUCE, although the mission and vision of DUCE is traditionally based entirely on research, teaching and consultancy, the gender issue is taken as cross cutting with a need to be considered in every college practice. Thus, the Gender Awareness and Transformation through Education (GATE) project was established (with Trinity College, Dublin, Ireland) under the existing DUCE Gender unit as a project to create awareness. The target groups are academician, administrative staff and students.

FY1 2019 Training Workshop
The FY1 2019 training workshop was conducted to train academic staff on different concepts of gender, gender frameworks on integration of gender in their specialisation and how to do gender analysis. Facilitated by Dr Susan Murphy, Principal Investigator of the project at Trinity College, Dublin, the key objective of the workshop was to create an opportunity for participants to reflect on their understandings of gender; to be introduced to a range of gender analytical lenses; to be introduced to theories of gender equality and inclusion; and to consider how individual researchers could integrate gender issues in their areas of research. All participants were encouraged to apply gender theoretical frameworks and analytical lenses when they write proposals, collect and analyse data. The aim is to ensure that gender considerations feature in findings.
Generating new knowledge for dissemination, providing greater insights and understanding; and identifying pathways to rectify the situation are the core objectives of this training session.

Objective Outcomes
When we conducted the workshops for concept understanding and the various frameworks, which are used to guide gender studies; most of the academicians admitted that for them, up to these sessions, gender was a concern for women only, and was a matter of parity and numbers. However, following the training and further engagements through research proposals, the staff participants discovered opportunities to explore more transformative and inclusive ways of building a gender dimension into their research and analysis. With these workshops it was the reflective process that allowed the academic staff, both male and female, who attended the workshop to discover new ways of influencing other academicians about the necessity of observing gender issues whenever they plan and conduct a research.

“The workshop created the motivation among academicians to start writing papers in their areas of specialisations while observing integration of gender issues. In the planned conference (2020) more than forty (40) papers will be presented due to increased awareness received from the FYI 2019 workshops and the enhanced research skills obtained through the training” – Dr Perpetua Urio -. 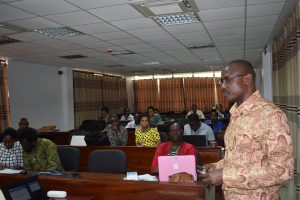