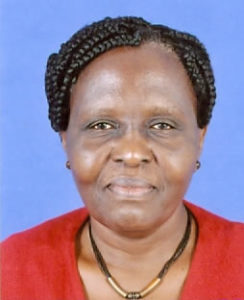 Prof. Penina Oniviel Muhando Mlama is a retired Professor of the University of Dar es Salaam, Tanzania. A long – serving Professor of Creative Arts at this university, she has held various positions, including Head of Department, Associate Dean Research and Dean of the Faculty of Arts and Social Services as well as Deputy Vice Chancellor, Academic.

Between 1998 and 2010 Mlama took time off from the University and joined the civil society to engage in the pursuit for gender equality and development. She served as the Executive Director of the Pan African NGO, Forum for African Women Educationalists (FAWE) dealing with the promotion of girls’ education in 34 countries across Sub Sahara Africa.
In 2011 she returned to the University of Dar es Salaam where she was appointed Professor of the Mwalimu Julius Nyerere Professorial Chair in Pan African Studies until 2018 when she retired.

In her long career as an artist, expert in cultural studies and gender activist, Mlama has spearheaded a number of movements and the formulation of development models. This includes the development of the Tanzanian version of the Theatre for Development model. Mlama is co-founder of the TUSEME Girls’ Empowerment for Gender Equality model, using the theatre approach. She is also founder of the Gender Responsive Pedagogy model for teacher training. Both the TUSEME and the Gender Responsive model have been widely applied in Tanzania and various countries across Africa. In 2016, Professor Mlama received a UNICEF Change Maker Award for girls’ empowerment in recognition of her work with TUSEME.

In the Creative Arts, Mlama has devoted her academic and creative work to African Theatre and culture through which she has fought hard for recognition, self-determination and self- assertion of Africa’s cultural identity and aesthetics. Her research work, creative writing and production reflect a constant search and experimentation with African values and cultural identity. Mlama has furthermore, served in numerous national and international Boards related to culture, education, gender and development.