On 10 June 2021, the GATE team at the Dar es Salaam University College of Educations (DUCE) organised and hosted the first-ever training on Unconscious Bias for the college’s Management team. In attendance were 16 female and 24 male management staff.

Group discussions focused on the understanding of the concept of gender, sex, and gender roles. A hearty but focused and sincere discussion ensued. Generally, participant expectations were sought, and the facilitator ensured that they provided context for this workshop and tailored their presentation to those needs. 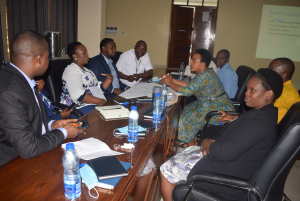 The facilitator took the participants through the existing literatures and reviews on the concepts of gender, gender equality and how these concepts are addressing the same concepts as those of unconscious bias. The discussions also informed on the global moments and movements, which set the gender equality and women’s rights processes. These gender equality and women rights moments eventually set the governments to develop policies, structures, and systems to address the problem. Consequently, the development of the National Gender Policies and Strategies and setting up of implementation machinery such as the Ministries of Gender and Women Empowerment were in response to this. For the benefit of the training, it was pointed out that the same policies were translated in Tanzania into creating gender focal points in Ministries, Departments and Agencies (MDAs) as per the set-out Cabinet Circular of 2000. The facilitator also noted that it is the setting of the gender focal points

which eventually led DUCE to have the gender desk and now the GATE project.

Therefore, the discussions of the various concepts such as Unconscious Bias are intended to create an enabling environment for dialogue and implementation, they noted.

The facilitator Salome Anyoti (UN WOMEN) introducing and discussing gender concepts. The story is not over yet at leat 2 paragraph or one more